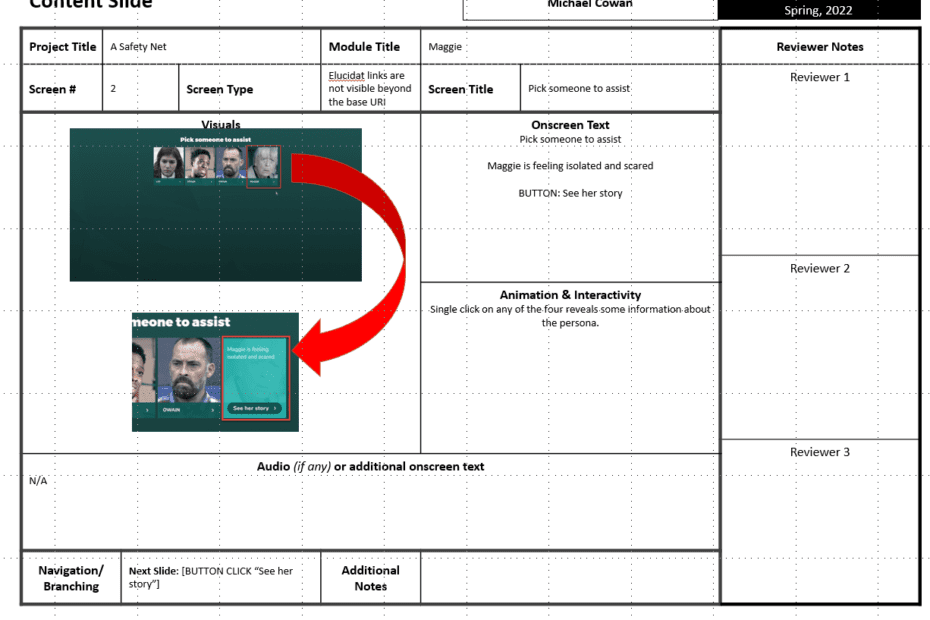 In an earlier post I described the value and process of reverse engineering a scenario-based e-Learning program. Taking it to its logical endpoint, I’ll drill down and do the same with a storyboard for the same module, A Safety Net.

The module is very simple. After a brief written introduction, slides (or screens) are interleaved with video clips thirty to ninety seconds in length. After each video a single question is posed with two to three choices for the learner. Actually, the first and last three choice slides produce the same outcome, regardless of which of the three options are picked. While I don’t fully understand why the designers made this choice, I’ll venture that it was in part a budgetary choice to offer fewer and more costly to produce branches. As well, they did this to provoke reflective learning to have the learner think about the person in need and what might be troubling them.

The interface is spartan offering nothing that would distract learners. The questions are posed in large, clearly readable white type against a dark background making it easy to read. Branching choices are made by clicking one radio button adjacent to the choice the learner picks, followed by clicking a “Submit” button. Videos play automatically and when they end, the video player closes and immediately displays the next question.

Each scenario begins with a video to introduce the character who needs help while providing some idea of what’s affecting them. The video is directed and shot in a documentary style, fluid camera and the acting is (mostly) naturalistic. For the learner the video provides a visceral picture of the subject designed to elicit empathy and concern. In the case of Maggie, the module I’ve been working with, I think this mostly works. For some of the video clips, the actress who played Maggie was very believable and for some, not as believable.

What Worked and Didn’t Work

What I liked about the module was its simplicity and that’s also what I didn’t like. I didn’t really explore the other three modules very critically, but with the Maggie scenario, I had difficulty understanding both Sally’s (her neighbor) choices and Maggie’s less-than-subtle responses. There is only one path that leads to a positive outcome. It seems like no matter what choices you make, nearly all outcomes are bleak. My final take is that as a reflective learning program, it has some merit. Maggie appears to be suffering from dementia, so anything you might say – even if you said it with a kind voice and it was well-meaning – could be misinterpreted due to her condition.